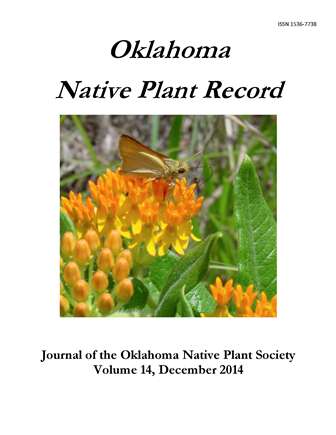 This paper presents the results of taxonomic and ecological studies of the plants of Kiowa County, Oklahoma. The collections were begun in 1933 and continued until the summer of 1938; however, little intensive collecting was done until the spring and summer of 1938. The Flora of Kiowa County, Oklahoma includes six species of pteridophytes, one species of gymnosperms, and 489 species of angiosperms. More than one third of these are in Compositae, Gramineae, and Leguminosae. There are 81 families represented. The 11 largest families, with the number of species are Compositae, 86; Gramineae, 58; Leguminosae, 41; Onagraceae, 17; Euphorbiaceae, 16; Cruciferae, 16; Polygonaceae, and Solanaceae, 12 each; Asclepiadaceae, Cyperaceae, and Labiatae, 11 each. The three largest families comprise 37.4 per cent of the total number of species.

[Species names used in the original thesis which appear in brackets have been updated using the USDA Plants Database.]